So finally a new article i finished. Managing IPv6 addresses in a DirectAccess environment is not easy. Hopefully my new article Adding IPv6 to your UAG Environment will help you understand how IPv6 on the DA server works.

It’s not a question of “if”, it’s “when”. I am talking about when you will implement IPv6 on your UAG. In this article I will show you how to do it.

In this guide I use UAG 2010 SP1 for all my screenshots. If you do not have SP1 yet I suggest you stop reading and upgrade your UAG environment to SP1 before continuing.

IPv6 and DirectAccess (DA)
Many of you might think that if you implement IPv6 in your internal environment you will no longer need UAG as DA server. Well your wrong, the main reason is that you will still need DNS64 and NAT64 to access the resources  in your network still in IPv4 address range. UAG also gives you a much better configuration interface, especially with SP1. There are more reasons, but this article is not to convince you to use UAG, I will assume the reader is already convinced.

UAG with DA is already IPv6 configured
When you configured DA on your UAG you noticed that IPv6 is a big part of DA. If you do a simple “ipconfig” you will notice several IPv6 addresses, if you then do a “route print” you will see a lot of IPv6 routing going on. But if you in the DA configuration look at the step, where you configure the external and internal addresses UAG should use, you will notice that you cannot choose an internal IPv6 address.

Adding IPv6 address to UAG
Although you could have UAG use some dynamic method to get it’s IPv6 address I strongly recommend you to do manual configuration of the IPv6 address. Hopefully this article will show you why. So lets take a look some things you need to configure in order to assign UAG an IPv6 address. 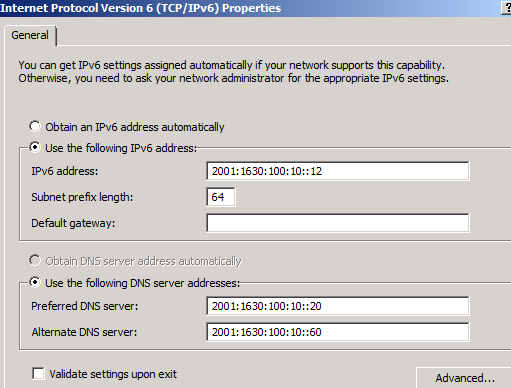 After adding the IPv6 address we need to take a look at the interface in more detail and understand why we did not add a default gateway.

Start an elevated command prompt and run
“netsh int ipv6 sh int” this will list the UAGs interfaces in the IPv6 world. As you can see there are quite a few. Find the internal interface and notice the number or name.

If you run netsh int ipv6 sh ro you will see the routing information UAG has regarding IPv6 traffic. As you may notice UAG has multiple default gateways (::/0 in the IPv6 world). This is due to the fact that router discovery is automatically enabled causing us to have a very complex routing situation. We need to take control over the routing… So lets look at that.

Manage IPv6 Routing in UAG
First we need to understand that apart from DirectAccess traffic UAG cannot operate as IPv6 router. Since you during setup probably enabled IPv6 on the external interface, you might have a situation where UAG automatically picked up an external IPv6 address. UAG will however not route traffic between it’s internal and external interface, the local TMG will prevent that. 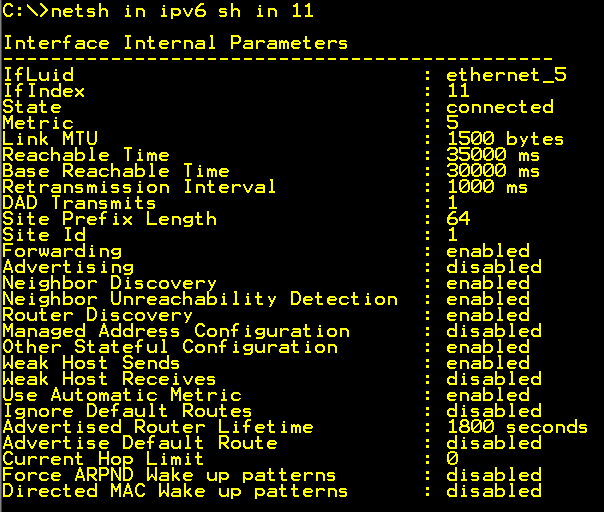 Router Discovery = enabled/disabled, tells UAG to or not to, listen to router messages on the network. If disabled we will need to configure static routing on UAG if there are other subnets that UAG needs to know about. If this is set to enabled troubleshooting routing on UAG will be a lot more tricky.  I recommend that you disable this on both the internal and external interface using the command. Netsh int ipv6 int 11 set routerdisc=dis. Where “11” is the number of the interface. Be careful so that you do not touch any of the DA related interfaces.
IMHO I think that router discovery should be disabled on all IPv6 machines that has static IP’s. Otherwise they will end up with two, one static and one dynamic from the network advertised by the router.

Advertising=disabled tells UAG not to advertise routes on the interface. I prefer to use a dedicated IPv6 router doing the advertising of routes on the network, and UAG as we stated earlier is not an IPv6 router in that sense. UAG will “own” several prefixes in your IPv6 world and your internal IPv6 router will need to handle that.

After disabling router discovery we now only have one default gateway on the UAG. This points to it’s own 6to4 router interface gateway. 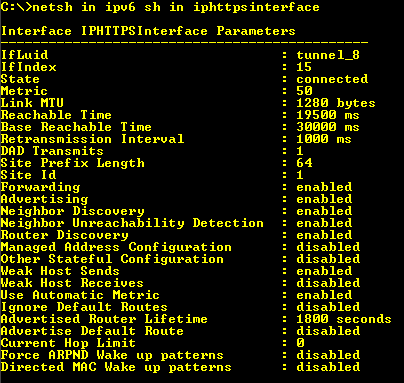 netsh in ipv6 sh in iphttpsinterface

UAG will still advertise its routes to the DirectAccess clients, which you can verify by checking the Advertise flag on these interfaces.

Configure DA to use IPv6 internally
After fixing the IPv6 address and routing it is time to configure UAG DirectAccess to use the internal IPv6 address. 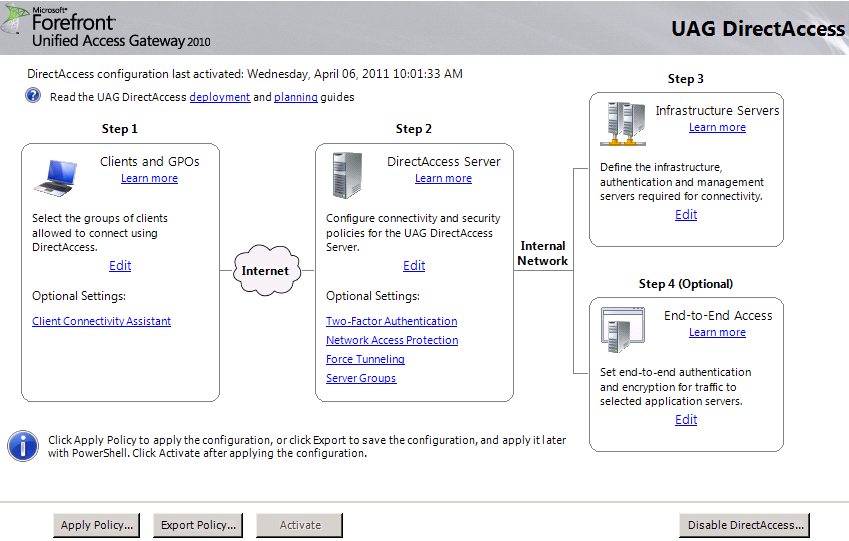 This is quite simple, just open the DirectAccess configuration and and edit step 2.

You will then be asked to tell UAG what prefixes it should use for different purposes.

When this is configured your are good to go, publish in AD and activate the configuration.

What about ISATAP?
You might have noticed that UAG tells you it will no longer work as ISATAP router when using IPv6. This is because logically you would not need ISATAP since you have IPv6 on the Internal network. However you might still in some scenarios have the need for ISATAP, and if so, I suggest you configure a separate ISATAP router, and tell this ISATAP router how to route the traffic to the IPv6 prefixes operated by UAG.

Conclusion
To summarize, it is not difficult to configure UAG in an IPv6 environment, as long as you have control over your internal IPv6 addressing and routing.