When working with educational customers a typical AD group i Students. This group however might contain hundreds of thousands of users, making it hard to manage. One solution is to make the Students group the primary group for the students. In this post I will show you one way of managing this using FIM 2010 R2.

The Primary Group in AD is stored in the attribute primaryGroupID as an integer. The value is the RID (Relative Identifier) of the group in AD. When you create a new user in AD this value becomes 513, which correspond to the Domain Users group. We cannot set this to any other value during provisioning, so we need to change it after provisioning is completed. If you look at the group in AD you will find that the value we are looking for is the last part of the objectSID. 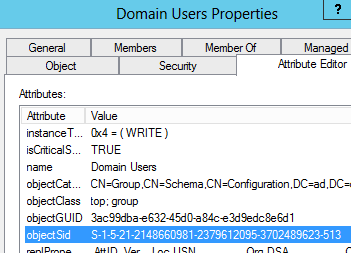 Now let’s see how we handle this in FIM.
We already have the Students group using some membership criteria. 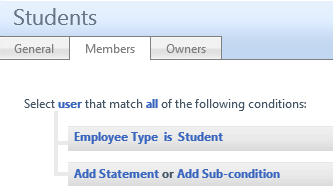 The group needs to be created and provisioned to AD in order for us to be able to record the primaryGroupID for this particular group. In the picture below you can see my group got the ID 1204. 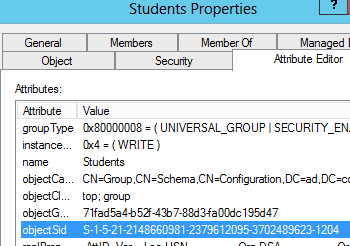 You can also get the value using PowerShell.

Once the primaryGroupID is set in Active Directory the user will no longer show up in the members attribute. So FIM will try to add them again, failing with an error about existing object.

We therefor need to modify the criteria so that it no longer contains the users which have been configured to have it as primary group. 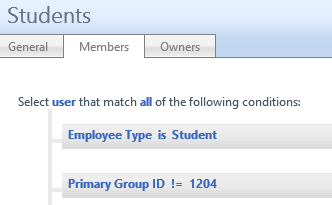 The outbound synchronization rule could then look something like.
IIF(IsPresent(primaryGroupID),1204,Null())
where “1204” is the primaryGroupID of the new group.

Once the account is created and the new primaryGroupID has been set we can run this clean-up activity to remove them from the Domain Users group, if that is desired.